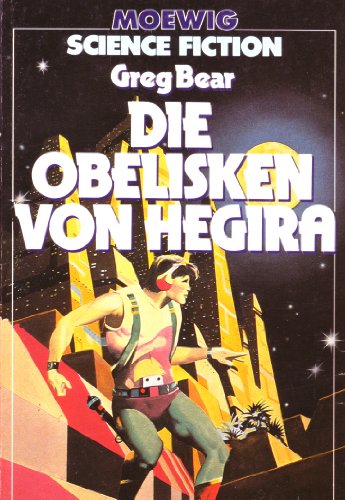 Inhalt
Greg Bear's SF career didn't really take off until Blood Music (1985), whose shorter 1983 version won the Hugo and Nebula for Best Novella. Hegira is his first journeyman novel from 1979, already showing a fondness for colossal scale and boggling surprises, but slightly clumsy in the telling--"top-heavy with explanations", said the SF Encyclopedia --despite substantial revision in 1987. Hegira is the overly apt name of a vast and evidently hollow artificial world moving on an immense journey to somewhere unimaginable. After countless generations in transit the inhabitants have only limited access to the knowledge of the "First-Born" builders, which is inscribed on the sides of 1,000-kilometre obelisks with elementary texts at ground level, advanced material higher up, and real secrets beyond the reach of balloon ascent. Later, in order to make more information available, an obelisk helpfully falls over and causes untold devastation. Meanwhile, brief glimpses of stars appear for the first time in the black night sky... Driven by legends about what needs to be done when a loved one is frozen in mirror-skinned stasis, three pilgrims go seeking the Wall surrounding this segment of Hegira, beyond which lies the Land Where Night Is A River. Here the planet itself speaks and explains the very complicated history and cosmology behind the story of Hegira. Journey's end approaches, and "The stars were here to stay". It is colourful and readable, even if Bear's ambition clearly bit off more than his 1979 writing skills could chew. -- David Langford