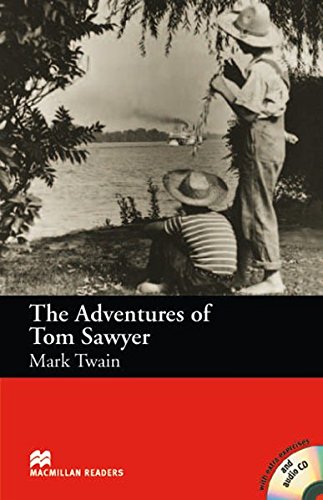 The Adventures of Tom Sawyer

Inhalt
Tom Sawyer lives with his Aunt Polly and his half-brother Sid. He skips school to swim and is made to whitewash the fence the next day as punishment. He cleverly persuades his friends to trade him small treasures for the privilege of doing his work. He then trades the treasures for Sunday School tickets which one normally receives for memorizing verses consistently, redeeming them for a Bible, much to the surprise and bewilderment of the superintendent who thought "it was simply preposterous that this boy had warehoused two thousand sheaves of Scriptural wisdom on his premises—a dozen would strain his capacity, without a doubt." Tom falls in love with Becky Thatcher, a new girl in town, and persuades her to get "engaged" by kissing him. But their romance collapses when she learns Tom has been "engaged" previously to Amy Lawrence. Shortly after Becky shuns him, he accompanies Huckleberry Finn to the graveyard at night, where they witness a trio of body snatchers, Dr. Robinson, Muff Potter, and Injun Joe, getting into a fight. While Potter is knocked unconscious during the scuffle, Injun Joe stabs the doctor to death and later pins the blame on Potter, who is arrested for the murder. Potter is then shunned by the whole town, except Huck and Tom, who knew the real story. They decided "to keep mum" about this incident because they are afraid of Injun Joe murdering them. Tom and Huck run away to an island. While enjoying their new-found freedom, they become aware that the community is sounding the river for their bodies. Tom sneaks back home one night to observe the commotion. After a brief moment of remorse at his loved ones' suffering, he is struck by the idea of appearing at his own funeral. Back in school, Tom gets himself back in Becky's favor after he nobly accepts the blame for a book she has ripped. Soon, Muff Potter's trial begins, in which Tom testifies against Injun Joe. Potter is acquitted, but Injun Joe flees the courtroom through a window. Tom then fears for his life as Injun Joe is at large and can easily find him.